There are a lot of python driver available for MySQL and two stand out the most. The one, traditionally everybody’s choice, sort of industrial standard MySQLdb. It uses a C module to link to MySQL’s client library. Oracle’s mysql-connector on the other hand is pure python so no MySQL libraries and no compilation is necessary. But what is the price for such comfort?

querying random cities by primary key using random from 1 to 8000. Max id in the City table is around 4000 so roughly half of the queries will run into no results and half will produce exactly one row. I did this to see if there is any difference between the two.

I ran 10000 random queries and collected the response times which are resulted in the following graph. On the X axis you can see the primary key value and Y axis shows the response time in ms. 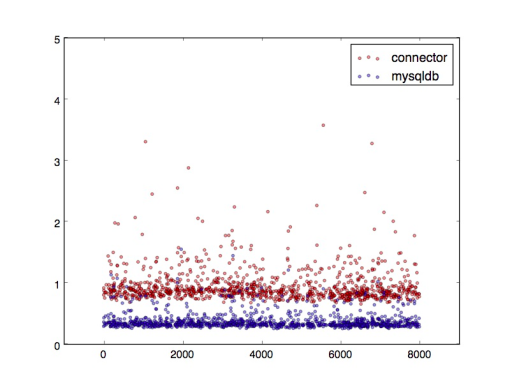 The difference is quite significant. Most of the query are taking more than two times longer using mysql-connector. It is also much more scattered.

Even the minimum time is ~2.5 times bigger using the mysql-connector and the max time is two order of magnitude higher.

I still use primary key lookups but now using id between [lower_bound] and [upper_bound] to produce random number of rows.

X axis it the number of rows returned and Y is the query time. Y maximised at 50 ms to focus on the interesting part. 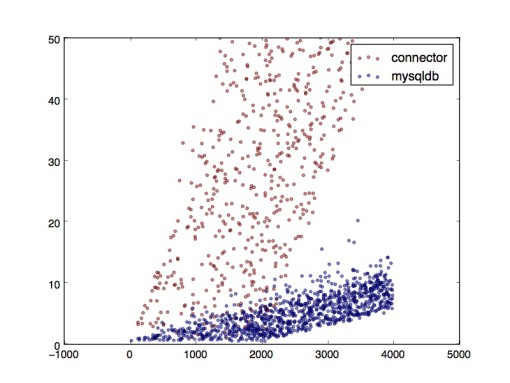 The difference is even more obvious here. With both driver the query time increases roughly linearly but with mysql-connector the growth is much more steep and more scattered again.

Since we’re having a linear growth here standard deviation doesn’t make too much sense to look at.

Where does the difference come from?

Using cProfile we can check where each version spends the most time. Now running the queries for 100 times.

The difference is quite obvious. Now python is doing the heavy lifting parsing and interpreting the data received from the socket while MySQLdb offloads that to the C library. This makes large dataset providing queries even less efficient and the difference is growing with the number of returned rows.

There is a slight difference between the averages but as the confidence interval shows there’s no statistically significant difference so we can treat the two as equals.

If you’re having a lot of primary key lookups or other type of quick point queries this difference can be quite significant and probably worth the extra effort to maintain those C binding.

If you query for larger dataset having an efficient way to parse is essential and while querying couple of thousand rows frequently might not be a common task to do the question boils down to if you can afford 20-30 ms extra time in such cases.

However if your queries are not in the millisecond range you probably won’t notice a thing as the overhead gets diminished with longer query runs and becomes insignificant around and above ~100 ms. In this case tune your queries first!

Useful python – Class based decorators and c... There are many things why Pyhton is my standard go-to language if it comes to implement something. It's either a website, automation, data-mining or c...
Priority queue in Redis aka ZPOP Redis list is great to use it as a processing queue. So great that it sort of became the standard and many people using that instead of dedicated queu...
Stop using await in a Python forloop Disclaimer: This might sound to be a rant but stay with me and you will see this will be a very good practical advise to speed up your async python c...